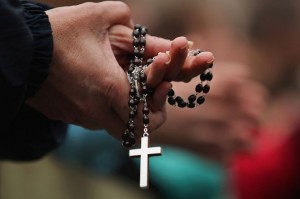 A woman doctor has been sentenced to death in the Sudan for switching religion.

Meriam Ibrahim, whose father was Muslim, married a Christian man and took his faith .

But a court has given her four days to repent or face the death penalty after being found guilty of apostasy meaning she renounced and criticised her former religion.

A court in Khartoum also ordered she was given 100 lashes for committing “zena” – the Arabic word for illegitimate sex – for having sexual relations with a non-Muslim man.

The couple married in 2011 and have a child, born 18 months ago, but under Sudanese law her marriage to a non-Muslim is regarded as void and makes her son illegitimate.

Amnesty International branded the the conviction and death sentence as “truly abhorrent”.

The human rights group said: “The fact that a woman has been sentenced to death for her religious choice, and to flogging for being married to a man of an allegedly different religion is appalling and abhorrent.”

“Adultery and apostasy are acts which should not be considered crimes at all.”

The group also called for her immediate and unconditional release.

Mrs Ibrahim, 26, can appeal against her death sentence as well as being whipped the 100 lashes.

Muslim women in Sudan are prohibited from marrying non-Muslims, though Muslim men can marry outside their faith.