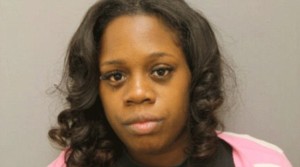 Miata Phelan, 24 was pregnant and acting outrageous. While most pregnant women cry because they can no longer fit the clothes in their closet or have cravings for strange concoctions, Mila just wanted her boyfriend to buy her something. In fact she craved new gifts so badly that she killed her boyfriend because he didn’t buy her anything on his recent shopping trip to the mall.

According to The Chicago Tribune, Phelan, 24, has been charged with first-degree murder for the April 30 murder of her boyfriend, Larry Martin,28.

Phelan stood over a stabbed Martin and yelled ‘This is what you get for messing with me. I hope you die, m***********’ as Martin’s 8-year-old son Lavelle watched, Assistant State’s Attorney Glen Runk reportedly said.

According to Runk, prior to the stabbing, Phelan, Martin, Lavelle and Martin’s 25-year-old cousin went to a shopping mall. She reportedly accused Martin of being ‘selfish’ for buying items for his cousin and son but not her.

Driving home, Phelan hit Martin and almost caused an accident. After she dropped off some items, Phelan ‘kicked and scratched’ Martin, before she sped off in his car and left him, Lavelle and his cousin on the street.

The three then walked to the home they shared with Phelan. However, Phelan locked them outside, and stabbed Martin with a knife when she finally let him in. She stabbed him right in front of his son.

Martin’s cousin heard Martin’s screams and was able to get him outside and apply pressure to the wound, Runk said. He was pronounced dead at an Oak Lawn hospital.

Phelan’s sister, Arnesia Phelan, told The Tribune that Martin physically abused her sister but only found out when she cancelled her baby shower, which was scheduled to take place on April 28.

On Thursday, Lavelle described his father’s last moments to The Chicago Sun-Times.

Martin’s mother, Angela Jenkins, told The Sun-Times her son taught her how to control her anger.

‘He taught me to learn how to control my anger. “Calm down, Mom,” he would always tell me that,’ she said.