Tragedy struck at Old Ojo Road, Amuwo Odofin local government area of Lagos State on Wednesday as a woman was stabbed by her daughter over the soccer match between Atletico Madrid and Chelsea Football Club. 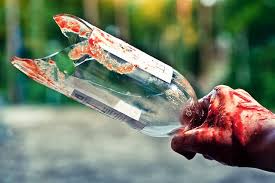 The daughter identified as Funmilayo had made a bet with her neighbour, Seun that Athletico Madrid would defeat Chelsea. She’d bet with N1,000 while Seun had bet with N5,000 that Chelsea will win and they both gave the money to one Anna.

At the end of the match, Funmilayo won the bet as Athletico beat Chelsea and she excitedly ran to Anna’s house that night to collect the money. On getting there, she found Anna shouting at Seun who had come earlier and dragged the money from her, leaving only N1,000 which he said should be given to Funmilayo as that was the amount she bet.

According to an eyewitness, Martins, Funmilayo headed straight for Martins house to demand her remaining N4,000 after Anna informed her about what happened.

On getting there, Funmilayo was said to have grabbed Seun’s shirt and he landed her a slap. She then grabbed a bottle, smashed it and was threatening to stab Seun when her mother got in-between them to stop the fight and she was mistakenly stabbed by her daughter.

She was rushed to the Isolo General Hospital where she is receiving treatment while Seun reportedly fled the scene before the victim’s other children would return home.

A police sergeant at the Satelite Police Station, along Old Ojo Road, said the incident would not be reported by the mother as it was her daughter who mistakenly stabbed her.