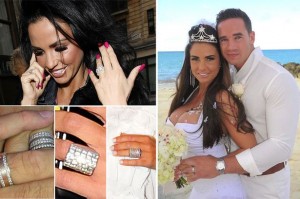 Canny Katie Price may be unlucky in love – but at least she can console herself with a collection of rings worth £908,000, reports the Sunday People

The former glamour model was devastated by last month’s split with her husband Kieran Hayler.

With the builder and part-time stripper she had clocked up her third failed marriage – and her fifth doomed engagement.

But there is a shining silver ­lining to Katie’s clouds.

Of the ­wedding and engagement rings given to her in the past 17 years, the five still in her possession are now valued at £907,750.

By far the most lucrative chunk of 36-year-old Katie’s haul came courtesy of her first husband, the pop singer Peter Andre.

Vashi told the Sunday People: “Katie has been very astute in her choice of rings. The price is ­definitely right for Pricey.

“She has has shown surprisingly good taste in all her choices and has done very well out of them.

“If only she had similarly good judgment when it comes to men.”

Katie – Jordan to her Page 3 fans – launched her rock collection in 1997 when she became engaged to bodybuilder and former Gladiator Warren Furman.

And that was just the start. The striking engagement ring that Aussie Peter Andre gave her – diamond-studded and taking up the entire first half of her finger – cost him £180,000.

Katie has now had it crafted into a beautiful bangle and plans to give it to her daughter Princess when she is older.

The bangle, along with all the ring’s original diamonds, has been valued at £250.000.

Jeweller Vashi, who is This Morning’s TV expert on the ­subject, said: “Katie’s second ­engagement ring is a stark contrast to her first.

“Comfort and practicality were evidently far from the couple’s minds.

“Longer rings are a prevailing trend, usually associated with fashion pieces and not rings crafted for eternity.

“I am sure the bangle she has made with it is equally beautiful.”

Andre followed up with the stunning wedding band but they split in 2009.

Katie then found new love – and another ring – with cage fighter Alex Reid.

He splashed out £25,000 on what Vashi describes as the most “eye-catching and exuberant engagement ring”.

Vashi said: “This is a ­gigantic sparkler.

“I’d speculate that the unusual stone is an orange sapphire or a pale orange spessartite garnet.”

Following their divorce in 2011, Katie returned her wedding ring to Alex, so it cannot be counted in her collection.

She went on to meet Argentinian hunk Leandro Penna. And again she got engaged.

This time, she was presented with a pink heart-shaped sparkler which cost a more modest £15,000.

Katie returned it to Harrods when she found Penna was paying it off monthly. Today it is worth £25,000 but she did not profit from it.

The latest addition to mum-of-four Katie’s lucrative collection came from her most recent hubby, Kieran .

He is the father of her ten-month-old son Jett and her unborn fifth child, a daughter.

The year-long marriage hit the rocks three weeks ago when she revealed on Twitter that she had caught Kieran having an affair with her best friend Jane Pountney.

At their ­wedding she wore Andre’s ring.

Why has Katie’s jewellery become so highly valued?

Vashi ­believes the answer is that people will always love a big rock they can flaunt.

He said: “Tastes change but there is huge demand for this kind of bling , particularly with the economy now doing so well and so much foreign money being invested.

“If Katie sold her rings, she would make a huge profit.”

And of course, there is still time to add to her collection…