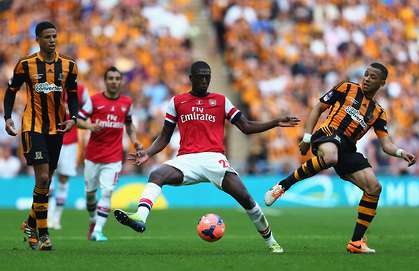 The Daily Star on Sunday reports how the 21-year- old Frenchman – introduced as a second half substitute at Wembley – taunted the Portuguese tactician for his failure to deliver a single trophy during his first season of a second spell in charge at Stamford Bridge.

Earlier this year, Mourinho caused a stir when describing Arsene Wenger as a
“specialist in failure”,

but it’s the Gunners boss who had the last laugh after guiding Arsenal to a dramatic 3-2 extra-time victory.

It was quite a gamble taken by the former Auxerre star in the build-up to the showpiece final though, and after Arsenal found themselves 2-0 down inside the opening 10 minutes he probably wished he’d never posted the message.

“Last tweet bfore history, who would have guess we wld be in this position 1 month ago ? So José how much trophy did you get this year ?” he tweeted.

Thankfully for Sanogo the Gunners hit back with goals from Santi Cazorla, Laurent Koscielny and Aaron Ramsey, ending the north London club’s nine-
year spell without a trophy.{GMS}