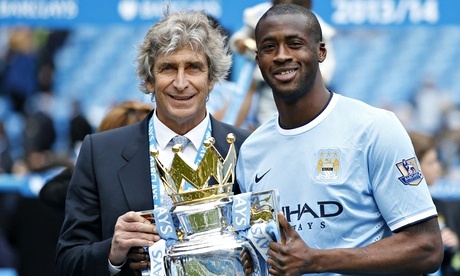 Yaya Touré is considering leaving Manchester City this summer because he feels disrespected by the club, according to his agent, Dimitry Seluk.

Seluk’s complaints include the fact, he says, that no one from City wished Touré happy birthday at a club event in Abu Dhabi to celebrate the Premier League
title win.

City may not take Seluk’s threat too seriously, though, given that they have a somewhat familiar feel. It has become, in fact, an annual event at around this time of year.

Just over a year ago Seluk said his client felt mistreated and was close to demanding a move.

Those comments came during contract talks that were finalised less than a month later, when Touré signed a four-year deal. A year earlier, too, Seluk
claimed the midfielder could leave.
With Touré, a hugely influential player at City, tied to a long contract, it seems unlikely the club would consider allowing him to go.

Seluk said in his latest complaint, via the Sun: “Yaya is so upset he’s thinking of leaving City. There are a number of things that have happened that have left
Yaya feeling bitterly upset.

He must concentrate on the World Cup now. But City have treated him with
disrespect and have really hurt him.”

Seluk added: “They don’t know that money can’t buy relationships – no Sheikh can buy a relationship. This
isn’t about money or a new contract – it’s about human relationships and City have shown they don’t respect him. I repeat, this is not about money. In fact,
he would take less to return to Barcelona.”

In reference to the birthday snub, Seluk said: “What happened at his birthday meant the club don’t care about him. It was proof. They can say whatever they
want, ‘Oh we like him but we forgot’.
“Forgot? About Yaya? The player who helped you to be two-times Premier League champions? The guy who helped you win the FA Cup and the League Cup?

“His birthday can be on a normal day and, in a normal team, his team-mates and club would at least give him good wishes.

“But when you win the title on May 11, a day later you go to Abu Dhabi and on May 13 you have a big party to celebrate the title and nobody comes to Yaya to say, ‘Happy birthday’, what more do you want?”(Guardian)