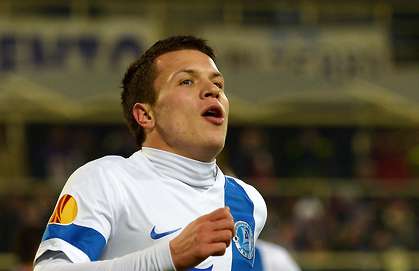 Dnipro winger Yevhen Konoplyanka would prefer to sign for Manchester United over Liverpool this summer despite a lack of Champions League football next season and is waiting to see if new Red Devils boss Louis van Gaal will sanction a €15m offer, according to The Guardian.

Konoplyanka came very close to joining Liverpool in January but eventually decided against pulling the trigger in a row over payment installments, leaving
the 24-year-old free to finish the season in his native Ukraine.

That stance is unlikely to stay the same this summer and United are now weighing up whether to meet the
speed demon’s £12.1m release clause, with Red Devils scouts making another check on the star during Dnipro’s clash with Metalurg Donetsk last Sunday.

United manager Louis van Gaal is understood to want Konoplyanka to bring pace and dynamism to wide areas at Old Trafford next season and the wing
wizard feels the same, unconcerned by not playing in Europe and more bothered about getting the chance to shine on a consistent basis in the Premier League.
Liverpool and a clutch of other clubs across the continent continue to monitor the situation closely but registering a bid looks a matter of if not when for United as we head towards what promises to be a hectic summer of transfer activity for Van Gaal, who has massive recruitment decisions to make all over the pitch.

With Bayern Munich maestro Toni Kroos off the agenda for United transfer supremo Ed Woodward attention has now turned to Konoplyanka, who is an
attainable target desperate to prove his worth in the Premier League next season.{GMS}