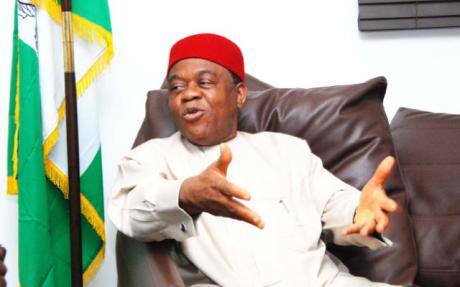 Angered by the alleged threat by the Jigawa State House of Assembly to drag Abia State Government to court over the arrest of their citizens among the 486 Boko Haram suspects intercepted by the army last Sunday in Abia, Gov. Theodore Orji has dared the lawmakers and warned them to stop trivialising security matters.

According to Orji, “Abia State government has not breached any law, so we are not afraid of any law suit coming from the Jigawa lawmakers or any other group”.

Orji, in a press statement issued yesterday in Umuahia, the state capital, reminded the lawmakers that the suspects were not arrested by the state government but vigilant security agents, and as such they have no grounds to drag the state into the fray.

The statement, which was signed by the Governor’s Chief Press Secretary, Charles Ajunwa, implored the Jigawa lawmakers, the Arewa Consultative Forum, as well as some individuals and groups of northern extraction “trivialising the arrest of the 486 Boko Haram suspects in Abia, to channel their energies on things that will promote the unity of Nigeria not on things that will destroy the corporate existence of the country”.

The statement also warned against politicising the incident along religious and ethnic lines, dismissing the threat by the lawmakers as both “laughable and diversionary”.

It read in part: “Their utterances showed that they are lawbreakers and not lawmakers. Instead of the lawmakers to praise the Abia State government for providing the security agencies the enabling environment to discharge their constitutional duties they are busy chasing shadows.

“We challenge the Jigawa lawmakers to come to Abia to understudy how the robust synergy and relationship existing between the executive and state House of Assembly have ensured the atmosphere of peace and tranquility being experienced in the state today.

“These unpatriotic elements for no just cause have deliberately employed all kinds of guerrilla tactics to tarnish the good image of the Abia State government simply because it exposed, and alerted the nation including the international community of the arrest of 486 suspected Boko Haram members by a team of vigilant and gallant soldiers on routine patrol.

“As a responsible government, we want to state categorically that Abia State government had at no time ordered the arrest of the 486 Boko Haram suspects travelling in a convoy of 35 buses; instead, the suspects were arrested on the suspicion that occupants of the 35 buses were travelling at odd hours.

“The Nigerian security agencies have the capacity to do a thorough job at the end of the day; they need our cooperation at this moment not distractions from self-acclaimed ethnic bigots who never mean well for the nation”.