Irate residents of Okoroba community, Nembe Local Government Area of Bayelsa State, on June 18, 2014, Wednesday, mobilised to protest against the Federal Government’s neglect of a crucial road-building project in the state. The rally was led by, probably, the oldest county’s protester. 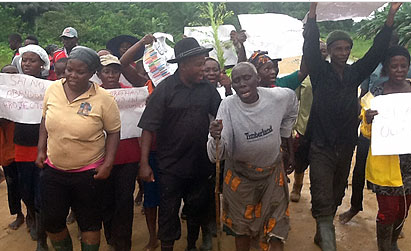 A 90-year-old woman, Madam Omiekumo Numo, was in the first rows to of Wednesday’s demonstration against the abandonment of the 10 km Opume-Okoroba Road project, which is to link the coastal town of Okoroba to mainland Ogbia LGA. Niger Delta Development Commission (NDDC) awarded the project to Mangrovtech, now Kakatar’ce, back in 2011.

However, its realisation has not started due to alleged disagreements over compensation. Another reason was non-availability of sand.

The angry indigenes were carrying placards with such inscriptions as “NDDC Save Our Soul”, “We Say No To Delay”, “EFCC: Probe payment of Compensation”, “Sand is not an excuse”, “Enough is Enough: Give us back our road” and several others.

They complained that people have to spend more than two hours to travel the impassable and swampy road. The locals would have spent less than 15 minutes, if the road had been constructed.

The leader of the protest revealed that everyone in the community is suffering, and that her children have abandoned her in the village because of lack of road communication.

“I am hungry and I woke up since 5am, to join the three hours protest march through the muddy water on the abandoned road to show you how serious and pained we are as a people,” Madam Omiekumo Numon narrated.

At the same time, the residents commended the NDDC for awarding the project to the construction firm, owned by an indigene of Ogbia.