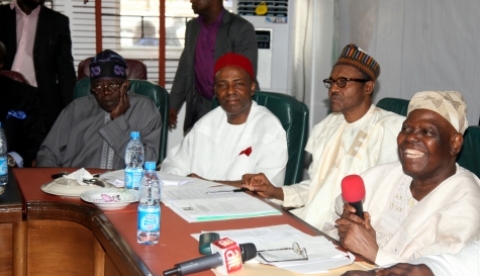 The party, he said, would also look into the complaints and protests over the congresses in some states.

According to Akande, state chairmen, who emerged outside the party’s guidelines would be unseated.

He made this known yesterday in Abuja at the inauguration of the newly-elected 35 of the 37 states and the Federal Capital Territory (FCT) chairmen.

Akande stressed that issues about the just-concluded state congresses would not be swept under the rug.

He was reacting to the protests at the ceremony on the outcome of the congresses in Abia and Ebonyi states.

Aside the two South-East states, the party has not inaugurated the state executives in Katsina and Kaduna because of some issues with their congresses.

Despite the pending issues, Akande expressed optimism that the convention will be hitch-free.

He said: “I am not a member of the Convention Committee. But the committee is working very hard. We will do our best to ensure that we have a rancour-free convention. Very shortly, we will do the national convention and then the national leadership will emerge.

“As time goes on, we will be announcing to you all guidelines and procedures for the National Convention and we will be inviting all our delegates to that convention. I am not going to tell you anything more because we have set up a convention which is already working hard to see that the final face of the structuring of the party is completed”.

On the purported preference of the North-East Caucus for a national chairman from the South-West, Akande said: “I have no opinion as I am not a member of the Northeast caucus”.

The interim chairman, who is reportedly stepping down after the convention, said APC was trying to create a party of new generation, which would be fair to all.

Akande added: “Those of you who are here today are the faces of what we call internal democracy, as being demonstrated by the All Progressives Congress.

“On July 31, 2013, INEC approved that this party should merge by the name All Progressives Congress. The party, since then, has become a movement in all the nooks and crannies of this country. And it is a party that everybody wants to join. We are very happy about this. Immediately thereafter, we inaugurated the National Interim Executive Committee of the party. Since then, we have held 10 meetings.

“The major functions of the Interim National Executive Committee were two: one function is to register Nigerians into the membership of this great party. We thank God that it has never happened in any other party in this country before. We were able to do it successfully. And all our registration forms are now at the data centres all over the country.