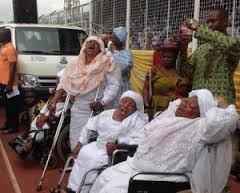 The remains of Aare Musulumi of Yorubaland, Alhaji Abdul-Azeez Arisekola, were buried in his home in Ibadan, Oyo State on Friday amid tears by family members, friends and associates.

The News Agency of Nigeria (NAN) recalls that Arisekola died in a London Hospital on Wednesday.

The corpse was brought to Adamasingba Stadium at exactly 10.05a.m. in ebony casket for prayer.

After the prayer led by Chief Imam of Ibadan, Sheik Haruna Suara, the corpse was taken to his Oluwokekere House, Ibadan, for interment.

Govs. Rauf Aregbesola of Osun and Ibikunle Amosun of Ogun, were also there.

“Arisekola was generous, friendly and accommodating to all and sundry, especially the downtrodden’’, he said.

Gov. Abiola Ajimobi extolled the virtues of the late religious leader, describing him as a philanthropist of philanthropists, who served the poor and also helped the rich during his lifetime.

“Aare was to the Nigerian masses what the late President Nelson Mandela was to the South Africans.

“He served the poor and helped the rich. He came to serve humanity and served them to his very last.

“He was accommodating, spiritual, religious and intelligent. He had been serving the poor from the age of 19. He was the greatest philanthropist of our time.

“Aare gave everything he had for the benefit of the people’’, the governor added.

Ajimobi said it was the good works done by the late business mogul that motivated his government into declaring seven days of mourning and a public holiday for him.

He said such a feat was unprecedented in the history of the state.

The remains of Arisekola were laid to rest at 11.15 a.m. in his Oluwokekere residence in Bashorun, Ibadan.

Security operatives had a hard time controlling over one thousand people who forced their way into the premises with many falling and sustaining minor injuries. (NAN)