Cesc Fabregas is becoming embroiled in a bitter battle with former club Barcelona after they refused to pay him £4 million owed from his transfer from Arsenal in 2011, reports The Daily Express.

The Spain international completed a £27 million move to Chelsea last week after spending three years at the Nou Camp with Barcelona. As part of the deal, Barcelona were forced to pay Arsenal over £5 million in clauses but they are refusing to settle their debts with Fabregas.

When Fabregas left the Emirates Stadium for Barcelona in the summer of 2011, he contributed £4 million out of his own pocket to make sure he sealed a move to his boyhood club. Barcelona committed to repaying Fabregas, but have now withdrawn that offer.

Following his move to Stamford Bridge, Barcelona has told Fabregas, 27, to forget the debt as they will refuse to pay it. They have also told him that if he makes the clause public, they will deny any agreement ever existed.

It is a sad and bitter end to what was once a beautiful relationship between the player and the club. Having joined Barcelona’s famed academy as a 10-year-old, he left for Arsenal aged 15. Loved by the Gunners, Fabregas yearned for a return to the Nou Camp and it
looked for all the world that he would be there for the rest of his career.

However, in what was a tough season for Barcelona, Fabregas found himself playing the role of scapegoat – a transpiration that ultimately sealed his fate. Now Fabregas must decide whether to cut his ties with the club and forget about the £4 million debt, or risk damaging his position with Barcelona further by becoming embroiled in a legal battle.

Having been offered a reported £10 million-a-year contract by Jose Mourinho, Fabregas is not going to go hungry any time soon, but getting the £4 million
owed to him will be a matter of principle.
The Spaniard gave up a key position in Arsene Wenger’s squad, essentially forcing his way out of Arsenal, to join up with his boyhood club, but, when the chips were down, the blame was pointed
squarely at him.

Fabregas now has to rebuild his reputation with Chelsea; a club he claimed he would never join in the
past. It is a thoroughly disappointing and
undeserving situation that Fabregas finds himself in and the least Barcelona can do is give him what they said they would pay him.{GMS} 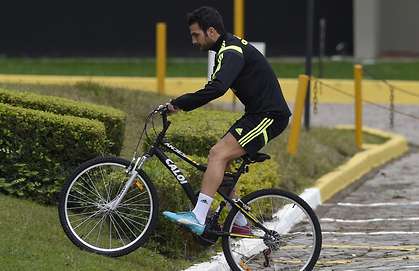