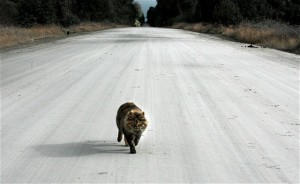 George knows what he likes — and what the 2-year-old orange tabby cat likes is his family’s old rented quarters in Portland’s St. Johns area.

When the family moved across town to east Portland in May, George slipped away and made his way back, somehow getting across 12 miles, three interstate highways and neighborhoods where residents often see coyotes.

Amy Campion told The Oregonian  that George probably got out through the garage the day the family was moving into the home they’d bought.

That night, they went out to look for him, and “we met a lot of the neighbors that way,” Campion said. George has a microchip, and they checked the agencies. No luck anywhere.

Campion, a garden writer, had spent months imagining what she would plant in her new yard. Now, she couldn’t bring herself to start without the cat she called her garden buddy.

“I was just broken-hearted,” she said.

When George didn’t turn up, friends suggested Campion let her old landlord and a few former neighbors know, in case George made one of those journeys cats sometimes make.

Earlier this week, the new renters at her old place called: George was hanging around, begging to be petted.

The Campions rushed over to retrieve him.

“I couldn’t believe it was him,” Campion said. “He was thinner, but he seemed perfectly fine.”

For a few weeks, George isn’t going outside without a leash.

“I really want people to learn from my mistake,” Campion said. “He shouldn’t have gone outside until he was familiar with the new smells and the area.”