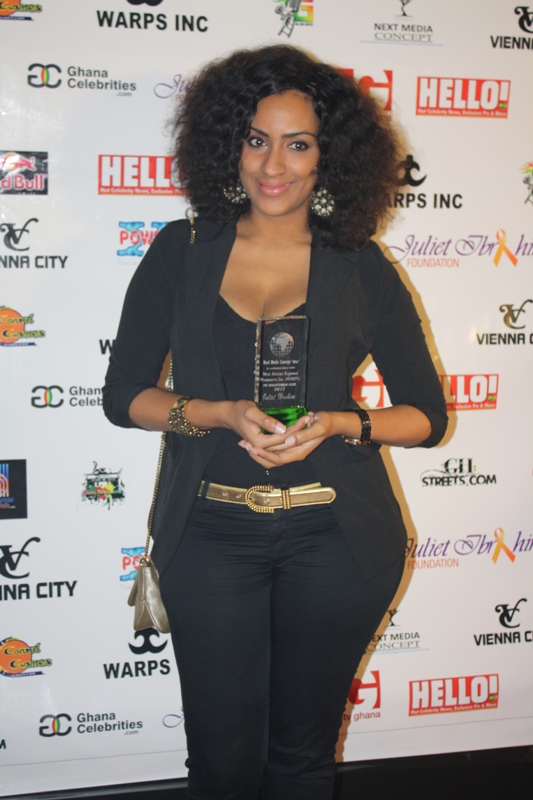 Juliet Ibrahim is a Ghanaian actress whose fresh faced beauty alongside her amiable nature has endeared her to her numerous ever growing fan base. She is very intelligent, talent -oriented, friendly, ambitious, highly-spirited, honest, humble, and smart with a bubbly personality.She loves reading, writing, listening to music, dancing, modelling, shopping and travelling. Considered the “fresh face” of Ghollywood (Ghana movie industry) Juliet made her film debut in Crime to Christ, 2007 co-starring Majid Michel one of Ghana’s brightest male acts.Juliet was born in Ghana on the 3rd of march 1986 to a Lebanese father; Mr. Hussein Ibrahim and a half Liberian/Ghanaian mother; Mrs. Sarah Elizabeth Ibrahim. She is the eldest of three siblings: Sonia, Nabil and Nadia and was rased in Ivory Coast and Lebanon.

Due to her being raised in different countries, Juliet Ibrahim is multi lingual and speaks French, Spanish as well as English. Her 2 sisters, Sonia and Nadia are both aspiring actresses and top models taking after their sister Juliet who herself aspired to become an actress and model at a young age.

Juliet ibrahim’s launch into the celeb world started with a modelling career as a runway and editorial model; modelling for the big designers brands in Ghana-Royal Dennis,B exotic, Joyce Ababio, Karim Isaka,Art Michael ,Dark and lovely,Woodin,GTP fabric and she has also featured in countless commercials, notably Wrangler Jeans and Veltins beer, .

She was featured in the Ghanaian musical group VIP’s music video ‘Me ne me jole’. Juliet who officially entered the Ghanaian movie industry in 2005, has often said she had waited for the right time to do so.

She was given a script to feature in ‘Crime to Christ’ in which she played the role of the girlfriend of a notorious armed- robber. She played her role so well with much passion and agility that she became the target of major films production houses and had countless of offers from film producers and directors, especially from Nollywood (Nigerian film industry).

After much consideration from the angle of the storyline, she decided to star in her first Nollywood movie “Yankee boys” where she played another “bad girl” role. She went on from”Yankee boys” to feature in another Nollywood blockbuster “Cash Adventure”.

She came back to Ghana briefly to star in “In the eyes of my husband” and “Lost Desire”. Nollywood gradually became a homestead for the Ghanaian film industry Goddess as she moves on from one movie set to the other, exhibiting a great and versatile acting prowess till date.

Juliet Ibrahim has gradually climbed the success ladder in the acting arena and has over 50 movie features to her credit.She identifies with American movie stars Catherine Zeta Jones, Vivica Fox and Beyonce as her role models in the acting field and looks forward to acting alongside them in the future.

SUCCESSFUL ENTREPRENEUR: Besides acting Juliet is a business-oriented person who proudly owns a beauty salon:Envoque Beauty Parlour,a boutique: House Of Glamour, a modeling agency:Dolfins Agency ,and a production house: Jewels Productions She also recently delved into music and would drop her debut album soon.

CHARITABLE CAUSES: Juliet Ibrahim Foundation (JIF) would be launched in December 2011 to start an awareness campaign about cancer of the kidney. The JIF is aimed at helping Ghanaians and other West African citizens to know their status and prevent kidney cancer from getting to the incurable stage. JIF is poised to help save lives and put smiles on the faces of the less fortunate living with kidney cancer but can’t afford to handle their bills.

AWARDS:Juliet was awarded alongside her fellow actors on May 01, 2010 by CITY PEOPLE MAGAZINE in Accra,Ghana for her OUTSTANDING ACHIEVEMENTS IN THE MOVIE INDUSTRY.Juliet won her second award on July 18, 2010 as the GHANA MOVIE PERSONALITY OF THE YEAR in Lagos Nigeria.Juliet was also awarded on December 25,2010 as the best lead actress in the movie 4play. In 2011, she also got an Award from CITY PEOPLE MAGAZINE as the Face of Ghana movies.