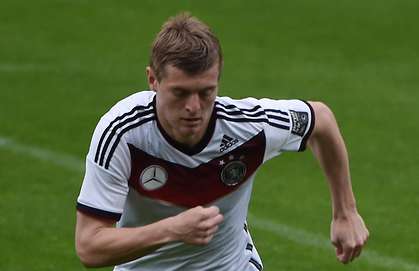 Chelsea manager Jose Mourinho wants Toni Kroos to join his summer spending spree at Stamford Bridge and has offered the Bayern Munich midfield linchpin a five-year contract worth a whopping €8.5m-a-season to complete the move, according to Spanish daily El
Confidencial.

Kroos is just about to enter the final year of his contract and Bayern and continues to snub any interest in a new deal with the Bundesliga giants, forcing Pep Guardiola to consider allowing the German international to leave this summer rather than walk away on a free in 12 months time.

The 24-year-old has been consistently mentioned in connection with a switch to Real Madrid and Manchester United over the last six months, but Mourinho is in no mood to mess around this summer and has put his cards on the table with a lucrative, long-term contract offer.

Mourinho’s transfer action has been swift, decisive and fairly pragmatic in the early weeks of the campaign, as proven by beating United to a £30m deal for Spanish playmaker Cesc Fabregas.

That deal has not stopped Mourinho targeting yet another quality central option proven on the Champions League stage though, which means Chelsea are prepared to beat any contract offer put
forward by Madrid or any other club to secure another transfer coup.

Madrid also want two new midfielders this summer and have held tentative early discussions with Kroos’ representatives, but are only prepared to allocate €6m-a-year for his salary and would prefer to sign either Paul Pogba, Marco Verratti or Chelsea star Ramires as a first option.

Kroos is of course currently focused on playing his part in Germany’s World Cup campaign,  but Mourinho has already proved this summer that the South American showpiece is no obstacle to a blockbuster deal going through.

The major obstacle to any progress though is Bayern, who have not given up completely on persuading the pass master to stay at the Allianz Arena beyond the length of his current deal.

Bayern may have failed to retain their Champions League crown last season but they still completed a domestic double in Pep Guardiola’s first campaign in charge, with Kroos a key part of winning both
competitions.

Guardiola is blessed with a plethora of midfield talent though and no player is bigger than Bayern, with Philipp Lahm most notably moving to central midfield with huge success last year and at a time when the German champions also have Thiago Alcantara, Bastian Schweinsteiger, Mario Gotze and Thomas Muller fighting for a starting spot.

That means Kroos could well seek out a fresh challenge and a more defined role elsewhere this summer, with the prospect of earning a massive €42.5m for five seasons of service at Chelsea surely very difficult to turn down.{GMS}