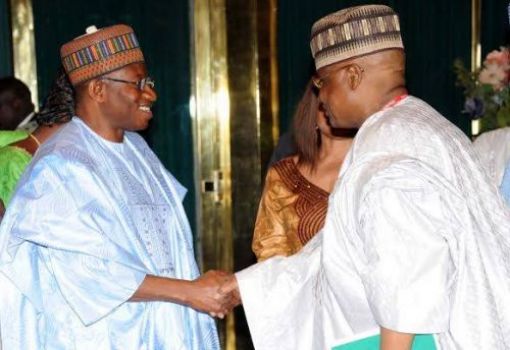 President Goodluck Jonathan on Friday described terrorism as a sad event and assured Nigerians that the evil the Boko Haram sect represented would not last forever.

Jonathan made the remark while receiving a report from the presidential fact-finding committee on the abducted Chibok female students at the Presidential Villa, Abuja.

Jonathan inaugurated the committee on May 6 to provide government with accurate information about the abduction. The Chairman of the committee is Brig.-Gen. Ibrahim Sabo.

The president said he would not rest until terror was crushed in the country because “Nigeria can no longer live with the monster called Boko Haram”.

Jonathan described the abduction as painful, especially as the Chibok girls were still in the hands of criminal elements and reiterated his position that he and the security agencies would not sleep until the girls were rescued.

Jonathan said that terror attack anywhere was an attack on everyone.

He said that contrary to the belief that security agencies were not doing enough to end terrorism, “they are doing their best but they should do more to end insurgency in the country”.

Jonathan commended the chairman and members of the committee for their commitment and patriotism in the discharge of their responsibility even at personal risk.

According to him, 119 students escaped from the school’s premises before the insurgents took away their classmates, while 57 of those abducted escaped and have been reunited with their families.

Sabo said: “The committee here wishes to lay to rest any residual doubt as to whether or not any student was abducted at Chibok”.

“As most Nigerians already know, there were some persons who doubted whether in fact any student was abducted.

“On the other hand, for those who believed that there was abduction, there were lingering doubts as to how such a number of kidnap victims were conveyed, considering also that information was sparse as to how the insurgents evacuated the victims.

“A total of 276 students were thus abducted. As of today, 57 of the abducted students have been reunited with their families after escaping along zig-zag transport route taken by the insurgents or by bolting to safety when the insurgents were resting.

The chairman said that the committee received the full cooperation of the people and interacted with different stakeholders considered relevant to the fact-finding mission.

He, however, said that a particular senator from Borno, whose name he did not mention, shunned the committee after he had initially agreed to an appointment.

“The singular exception was a senator from Borno who, after agreeing to an appointment with the committee, turned around to avoid the meeting on the excuse that he had another appointment and would thereafter be unavailable for one month or so.

“Not that his non-appearance has materially or in any way affected the outcome of the committee’s findings, but the senator’s avoidance of an interface with the committee may well speak to a motive not too difficult to discern”, he said.

Sabo noted that though Nigerians and the rest of the world had been galvanised to drum up support for the freedom of the girls, little would be achieved through finger-pointing.

“Getting the girls out and safely too, is of more importance than the publicity generated by the blame game that has tended to becloud the issue”, he said. (NAN)