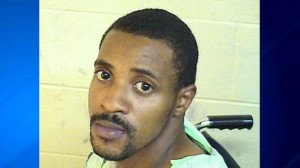 A suburban Chicago man has been found guilty of stabbing his 3-year-old son to death and sexually assaulting the child’s mother in a 2011 attack at her home.

The attack took place at his girlfriend’s apartment on the West Side of Chicago.

According to prosecutors, the couple was arguing when Sandifer sexually assaulted the woman at knife point. Authorities say he stabbed her four times and pushed her out of a window.

The woman was able to flag down a passing Chicago Police officer, according to prosecutors. However, before authorities arrived, Sandifer found a second knife and stabbed the 3-year-old boy multiple times.

Jaivon Sandifer was pronounced dead at John H. Stroger Jr. Hospital of Cook County, according to the Cook County Medical Examiner’s office. An autopsy determined he died of multiple stab and incise wounds, and the death was ruled a homicide.

The woman was taken to Stroger Hospital for treatment of stab wounds and for injuries suffered from falling out the window and being sexually assaulted.

Sandifer tried to get away, but officers found him hiding in a nearby garage and took him into custody.

Sandifer, of the 900 block of Bowling Green Drive in Homewood, faces up to life in prison when he is sentenced in July.