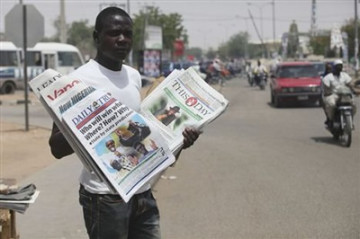 The Nigeria Labour Congress (NLC) has kicked against the ongoing clampdown on newspaper vendors, arrest of circulation drivers of several newspaper publishing companies and the reading public’s denial of access to information by the Nigerian military and other security agencies, saying the trend is absolutely unacceptable and not in tune with democratic norms.

The labour union also called for an end to the war against the media adding that all those who suffered losses, particularly newspaper vendors and publishers, must also be compensated while the security operatives involved in the attacks must be apprehended and adequately punished as enemies of democracy.

It said the military and all the security agencies ought to know that all fundamental rights are germane to democracy and, therefore, they lack constitutional and legal rights to unilaterally order the circumscription of freedom of the press or any freedom in any form.

In a statement by its national president, Abdulwaheed Omar, NLC said it could not find the link between insecurity and a free press in democratic governance, adding that instead, the press has helped everyone with useful information, which also arouses security consciousness among citizens.

He said, “We strongly believe a free press is very critical in the sustenance of democracy and any obstruction to the operations of any critical organ of our democratic process would be resisted as the recent infringements in the circulation of newspapers portend.

“In any case foreign media organizations seem to have more access to information on these violent groups, especially Boko Haram, than our security agents.

“The security challenges we face must not be politicized and perhaps those in authority must know they are responsible and accountable to all Nigerians no matter what class, dogma, ethnic or political dispositions, and must not see governance with political bias.

“Democracy cannot survive without the media; no democracy anywhere in the world can survive with a circumscribed media. Freedom of and access to information is what builds democracy and we must not allow any of our security agencies or military formations befuddle our collective quest for sustained democratic governance.

“The period of impunity associated with unaccountable military dictatorships should not be reawakened by those elected under democratic platforms as this will mean an open invitation to anarchy.

“What Nigeria and Nigerians need now is an end to the ongoing armed attacks and we believe all agencies responsible for the protection of lives and properties in Nigeria are capable of ensuring this if well motivated, better equipped and not partisan.

“In the course of disrupting newspaper circulations, not a few have been left in deeper agony and poverty since their means of livelihood have come under armed attacks by those expected to protect them”.