Kadré Ouédraogo, the president of ECOWAS Commission has sent an urgent message to three teams representing the Sub-region at the 2014 FIFA World Cup in Brazil. 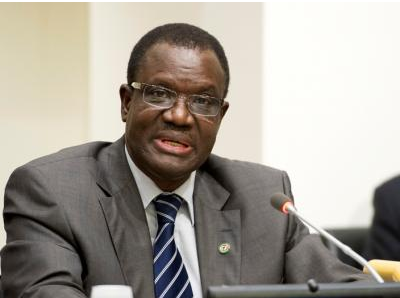 Kadré Ouédraogo, the president of ECOWAS

The commission, in statement issued on Friday in Abuja, by its spokesperson, Sunny Ugoh, urged the ECOWAS representatives at the World Cup, comprising Nigeria, Cote d’Ivoire and Ghana to excel in the tournament.

The commission said that the president tasked the teams to surpass the quarter-finals record of African teams at the Mundial.

The statement said that Ouédraogo in a goodwill message to Africa’s five representatives encouraged “Team ECOWAS” to aspire for excellence through professionalism.

He charged them to uphold the spirit of sportsmanship and do the continent proud.

The commission assured the teams that the entire community and its more than 350 million people were solidly behind them as they fly the region’s and Africa’s flags in Brazil.

The statement further added that the commission’s president wished Cameroon and Algeria, the two other Africa representatives, good luck at the Mundial.

“With hard work, discipline and dedication, African flag bearers could bring the coveted trophy to the African soil for the first time in the World Cup history” Ouédraogo said.

The World Cup kicked off on Thursday with 32 nations participating.