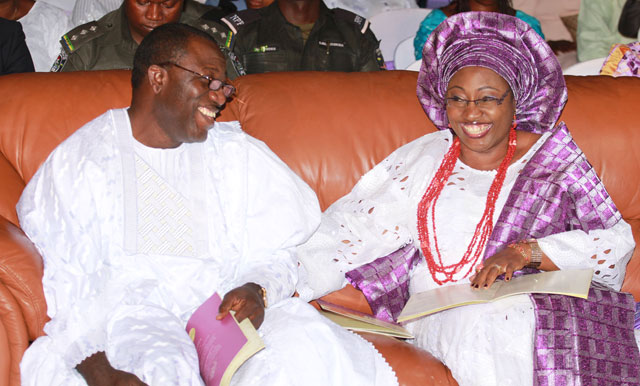 Ekiti State First Lady, Erelu Bisi Fayemi on Thursday took her husband’s re-election campaign to the state-owned University Teaching Hospital, Ado-Ekiti, where she lauded Governor Kayode Fayemi as a more competent, focused and savvy candidate than all his contenders.

Mrs. Fayemi, who took advantage of the hospital’s Nurses Week to campaign for her husband’s re-election, charged them as professionals, who come in contact with people on a daily basis, to sell Gov. Fayemi’s candidature to voters.

She explained that the electorate owe the future generation a sacred duty to scrutinise the antecedents of candidates jostling to govern the state from October before casting their votes for any one of them.

“This election is just not about Governor Kayode Fayemi or the APC. It is about the future of Ekiti and our children. This election will determine what the state will look like in the next 15 years.

“What do we want Ekiti to be like in 10 to 15 years down the line? Do we want an Ekiti that will continue to be inheritor of chaos, disunity, misgovernance, looting of state treasury or of a lack of future for our children? Will it be what it was in the recent past when people asked us how we came about having certain people as our leaders?” she asked before continuing, “We believe that this election will give us an opportunity to establish a foundation that will ensure that Ekiti becomes the state where other people will come and do business and be proud of”.

While stressing that people of the state cannot afford a reversal of their fortunes, Mrs. Fayemi described her husband, who is seeking re-election on the platform of All Progressives Congress, APC, as intelligent, competent, savvy and focused, adding that he stands tall among other contenders for the governorship position.

Other contenders for the governorship are ex-governor Ayodele Fayose of the Peoples Democratic Party, PDP, and Hon. Opeyemi Bamidele of Labour Party.

Mrs. Fayemi maintained that the governor needs another term in office to consolidate on his accomplishments since he mounted the saddle on October 16, 2010.

Fayemi reiterated her appeal to the nurses to use their positions as grassroots professionals to educate the people on the need for them to vote for her husband whom, she said, had a track proven track record of accomplishments.

She promised that the government would assist the nurses in the planned construction of a crèche, even as she pledged to donate a bus to the nurses association in the foreseeable future.