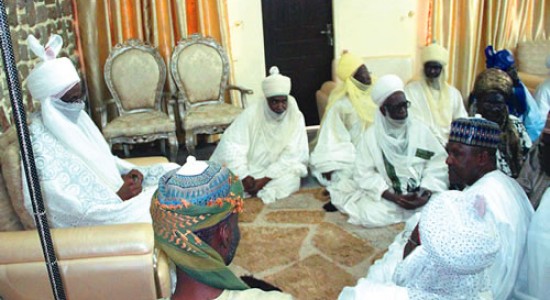 Contrary to reports, the new Emir of Kano, Malam Lamido Sanusi, who was turbaned on Monday, has not been denied access to the Emir’s palace located in the Nasarawa area of the state by security operatives reportedly acting on “orders from above” but because of “certain normal arrangements that precedes any emir’s grand entry into the palace”, PREMIUM TIMES is reporting.

Quoting a source familiar with the workings of the emirate council Wednesday, the report said the heavy presence of policemen around the emir’s palace is to safeguard it against hoodlums.

Lending credence to his assertion that there was a precedence, the source added that most of the previous emirs, including the immediate past one, Ado Bayero, took sometime before they eventually went to live in the palace.

“Traditionally, a new emir does not even go into the palace through the front door”, he said.

“Rather, he chooses within the wall of the palace a specific location in which he wants to use to enter the palace. That portion of the wall is then opened for him to enter”.

Citing the late Bayero as an example, the source explained: “If you notice towards the western end, along Yola road, you will see an opening that is covered with concrete block that was the door Ado Bayero used when he was appointed as emir”.

He also added that if the police or protesters were there to stop the new emir from gaining entry to the palace, they would have stopped the party that went there to fetch the paraphernalia of office that was handed over to Mr. Sanusi yesterday.

According to him: “The police provided security escort to the team that went to fetch all those items and it was not done in the hidden, the vehicles went through the main gate and none attempted to stop them despite knowing of their mission”.

The items recovered from the palace and handed over to the new emir include the symbolic Dabo’s Crown (Malafar Dabo), Tagwayen Masu (twin spears), Takobi (sword), Wukar Yanka (a knife that signifies supremacy of judgement) and Takalmin Jimina (ostrich plumage shoes).

Another source within the Kano state government, who also spoke on condition of anonymity to PREMIUM TIMES, said the family of the late emir also needed time to fully relocate to their new abode provided by the state government.

“The late emir had a large family and they will need to take their time to relocate and no one is in a hurry to move them”, he said adding, “Beside, you know they are still receiving condolences at the palace”.

On the presence of policemen around the palace, state Police Public Relations Officer, Magaji Majiya, said that security presence in the palace was a precautionary measure to ensure there is no escalation of violence following the protests that greeted the emergence of the ex-CBN governor as the new emir.

“You know the situation of things demands that we remain vigilant and ensure that any tendency for violence to erupt is quickly nipped in the bud”, he said.

“That is why security is intensified”, Majiya, a Deputy Superintendent of Police (DSP) said.