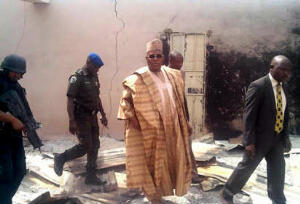 Governor Kashim Shettima of Borno State has described Saturday’s trip to Gwoza, where he paid his last respects to the late Emir of Gwoza, Alhaji Shehu Idrissa Timta, who was killed by suspected Boko Haram gunmen on Friday, as most petrifying. He said travelling through such a dangerous route that has become a slaughter ground for insurgents on a daily basis requires more than just having courage.

“If I say I was not petrified travelling through that 135km of road to Gwoza, I would be lying because that road had been designated a no-go area for about two months now due to the incessant attacks and killings that occur there”, said Shettima.

“But leadership requires courage and sacrifice. Courage, I believe, is not only about the absence of fear but the belief that there is something greater than that fear”, he added.

On the long and tortuous trip to Gwoza, Shettima was accompanied by about 150 soldiers from the 7 Division, Maiduguri, police special squads and members of the Civilian JTF, who led the way. A Nigerian Air Force fighter jet also provided air cover as the governor’s convoy travelled through the most dangerous route in the state (Maiduguri-Bama road) to get to his destination.

We had earlier reported that no traditional ruler, either from within or outside the state attended the burial of the late Timta owing to the unpredictable security situation on the way to and around Gwoza town. Gov. Shettima, his deputy, Zanna Mustapha and Senator Mohammed Ali Ndume, who hails from Gwoza, were the highest public officials at the burial of the slain monarch.

It was learnt that even family members of the deceased monarch, who had either relocated to Maiduguri or were living there, could not make the trip on their own to pay their last respects to their murdered monarch. They had to wait at the outskirts of the state capital until the governor’s convoy came to lead the way before they too trailed behind.

On the road to Gwoza, a LEADERSHIP reporter, who was among the few journalists allowed to be on the trip, counted no fewer than 16 towns, villages and hamlets that were completely deserted along the 135km road to Gwoza. Most of the communities had suffered successive attacks until the villagers had to flee to other towns and villages.

On this observation, Shettima said: “The sight of those deserted villages was very pathetic; it was devastating. But we believe no matter how long the night tarries, it must give way to the light of the dawn. Yes, stormy the weather might be, but it won’t rain forever; in the no distant future, we will have an enduring peace in Borno. My consolation lies in the fact that we have over 1,000 years of recorded history. We strongly believe that from the ashes of this destruction, Borno shall rise again”.