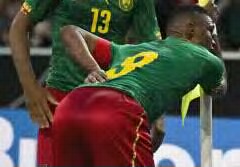 Samuel Eto has yet again mocked Jose Mourinho after celebrating a goal in Cameroon’s 2-2 friendly draw against Germany on Sunday night.

Mourinho was caught on camera lamenting the quality of the forwards at his disposal at a sponsors’ event in Switzerland in February, and suggested that Eto’o could be older than he claims to be.

The 33-year-old striker netted the first goal against Joachim Low’s side on Sunday, and repeated the celebration he first unveiled against Tottenham where he held his back in mock pain and used the corner flag as a walking stick.

Despite the previously strong relationship between the pair at Inter helping to secure Eto’o’s signature last summer, the forward has since labelled Mourinho both a “fool” and a “puppet”, and has been released by the Stamford Bridge side.

“Today, I am 33-years-old – and it is not because a fool called me an old man that you must believe it,” Eto’o said on 15 May, while he believes he did more at his age than Mourinho’s other striking options last season.

“Contrary to what a puppet says about my age, I am still physically fit. At 33, I feel really good. I have proven that I can do better than the younger players,” he said a week later.

Goal understands that Eto’o is in talks with Chinese side Guangzhou Evergrande over a move, though his high wage demands may prove a stumbling block.

Another Chelsea forward, Andre Schurrle, also netted in the friendly as both Germany and Cameroon stepped up their preparations for the World Cup.{GOAL}