French Students Invent Car That Runs for 2,000 Miles on a Single Liter of Fuel 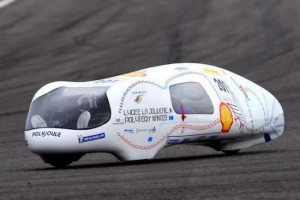 The Microjoule is an extremely fuel efficient car that can travel over 2,000 miles on just a single liter of fuel. That sounds ridiculously unbelievable, but it’s true. The carbon fiber vehicle is built to accommodate just one person at a time, lying down, which is a weird way to travel, but who cares, when it covers a 200-mile journey for just 20 cents?

The Microjoule is the brainchild of a group of French students at the La Joliverie College in Nantes, western France. They built the superlight vehicle (35 kg) as a part of the 2003 Shell European Eco-Marathon Contest to find the world’s most fuel efficient vehicle. Needless to say, they won, beating 200 other teams competing in the event.

The judges at the contest tested the car on a track in Rotterdam, the Netherlands – they calculated that the car could do 2,072 miles (that’s 3,300 kilometers) per liter of fuel or 9,400 miles per gallon. Which means that driving the Microjoule once around the world would only cost about $26.

One of the students who worked on the project, said: “The car has an internal combustion engine and runs on ordinary fuel. It weighs 35 kg and is made entirely of carbon fibre. It offers very low rolling resistance and air resistance, and a very, very low drag coefficient. For example, when you spin the wheels, they will turn for several miles without ever stopping.”

The car, shaped like a water droplet, has a nose area of 3.3 sq. foot for better aerodynamics. It can run on both petrol and ethanol, and the minimum weight of the driver has to be 50 kg. The high fuel efficiency is a result of its low rolling resistance and the low drag coefficient.

The other cars that were entered into the competition were not very far behind the Microjoule in terms of fuel efficiency. For instance, students from the Hogeschool van Amsterdam also set a circuit record of 266 miles per kilowatt hour with their invention, called H2A. A team from Louis Delage college in Cognac, south west France, won in the Urban Concept category, with a car that achieved over 450 kilometers per liter.

With the rising costs of fuel, I suppose concept cars like the Microjoule could well be our future. Who knows? We might just have to sleep our way through a car ride in the not so distant future!