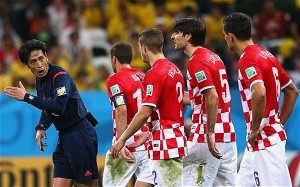 Vedran Corluka says referee Yuichi Nishimura tried only to speak with the Croatia players in Japanese as they sought explanation for the decision that turned opening match in Brazil’s favour.

The Croatia players have escalated their attack on Yuichi Nishimura, calling on Fifa not to give the Japanese referee another World Cup game and to simply award the trophy to Brazil unless standards of officiating improve.

Vedran Corluka, the former Tottenham defender, also revealed that Nishimura tried only to speak with the Croatia players in Japanese as they sought explanation for the decision that turned last night’s opening match in Brazil’s favour.

The main controversy arose in the 70th minute when, with the score still 1-1, Nishimura awarded the softest of penalties for the most fleeting of contact between Croatia defender Dejan Lovren and Brazil striker Fred.

Neymar converted the chance and Brazil
went on to prevail 3-1.

“I think if this continues then no one should play against Brazil,” said Corluka.

“We should just give them the World Cup and everyone can go home. I think it is
embarrassing.

“I have never seen a referee in a World Cup that doesn’t speak English. It is quite amazing. He was trying to speak to the players in Japanese. It is ridiculous. He was speaking Japanese but no one
could understand him because we don’t have Japanese players.”

“Everyone saw that, not just Croatian players. Every 50/50 decision went to Brazilian players and I think Neymar elbowed Luca (Modric). After that he gives the penalty. We scored a goal, he disallowed a goal. It was quite embarrassing. It was the opening of the
World Cup and you expect something more. He was keen to give the penalty. After that he wanted to give something to us. It was quite funny. I don’t think he
should be allowed to referee another game.”

Lovren, whose minimal contact with Fred somehow still provoked such a theatrical reaction, admitted that he wanted to cry after the game. “It is not just difficult for me to take, but for everyone who watched this game – I think it was two billion people,” said Lovren. “Of course I am angry. I want to cry now. I was asking the referee, ‘how can you do this to us’? He didn’t know what to say. The problem
is that the referee doesn’t speak English.

“It is a shame that he cannot explain to me or to anyone else in English. How can any referee be in the World Cup for that? It is like when a player gets a red card and he will be out for two or three games. I think It [should be] the same.”
Asked if Brazil were favoured, the Southampton defender added: “Maybe yes, maybe no. If it is like this, then we can give the World Cup directly to
Brazil.”{Telegraph}