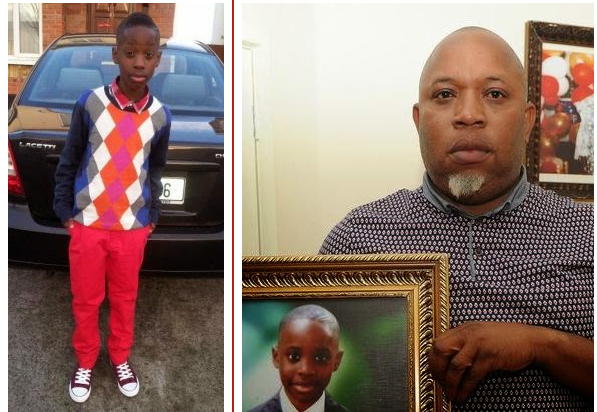 13 year old Ricky Osagie (pictured above, his dad right) from Warrenstown died on Saturday June 21st following a brave attempt to try to save a girl who had got into trouble swimming in a man-made pond at Waterville Hall residential complex in Blanchardstown, Dublin on Friday June 20th.

According to Irish Mirror, a friend of Ricky’s, a teenage girl, got into the water and was almost drowning when Ricky and another female friend jumped into the pond to try to save her. The other teen girl who jumped in to help also now had difficulties in the pond, and it was up to Ricky to save both girls. Which he did. Paramedics were called and all three teens were taken to the hospital. The two girls survived, but Ricky died the next day.

Ricky Osagie was a teenage soccer sensation whose dream was to represent Ireland, his distraught father, Kelly Osagie told the Sunday Irish Mirror. He said Ricky was a hero because he knew he was risking his life when he went into the water as he couldn’t swim.

“He was trying to help someone else.That’s what happened. My son died a hero. He went in and then that was it. My son is gone but a girl is alive because of him. He always smiled and was happy all the time. He was such a fantastic footballer. We have trophies everywhere in the house. Ricky was going to play for Ireland, that’s what he said he was going to do. He had so many friends. He is a hero, a real hero. I want the world to know what my son did. He was a man.”