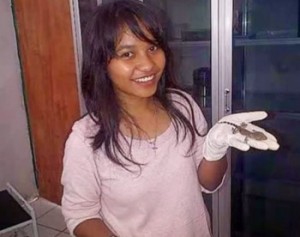 Debi Nubatonis, a woman from Oenunto village, Indonesia, has baffled doctors and scientists with her claim – she says that she went through a full-term pregnancy, only to give birth to a bouncing, healthy baby gecko lizard! We’ve heard enough of such stories to know that it’s probably a hoax, but it looks like Indonesian authorities are investigating to check if it might just be true.

Last month, at the request of the Chief Medical Officer (CMO) of the nearby Kupang City, a special team was dispatched to Oenunto village, where the new mother lives. “Basically, there’s something not right here,” said CMO Messe Ataupa. “We are looking into whether this was intentional or not. Clearly the womb must have been empty and this is what’s known as pseudocyesis. So the gecko coming out is probably some kind of hoax. Childbirth of another species has never been reported in science.”

Pseudocyesis, or ‘phantom pregnancy’ is a condition in which women believe that they are pregnant and even display the physical signs of pregnancy, including a distended belly. But in reality, there isn’t any fetus inside the womb. According to eyewitnesses from the village, Debi was visibly pregnant and seemed to be in her eighth month before she went into labor on May 30.

On that fateful day, she chose not to go to a hospital because it was too far away. Instead, she called for a midwife to assist her with childbirth. Josephine Lydia Hellen Wadu, the midwife, said that she arrived just before the birth. A lot of mucus and blood emerged, and instead of a human baby, Debi popped out a baby gecko. Josephine immediately knew that something was terribly wrong, so she took the ‘newborn’ to Oenuntono Health Center to get it checked.

This is why the case is so interesting – if it really was a phantom pregnancy, nothing should have emerged from Debi’s womb. So where in the world did the lizard come from? If the whole thing is a lie, why would the midwife confirm the claim? What could she possibly gain from cooking up such a wild story? For now, we’ll just have to wait for the experts to get to the bottom of the matter.