If music is ranting on the mic, controversial Nollywood actress, Tonto Dikeh would make any playlist.

On screen, her talent is never in doubt. It is however at singing that she unsettles many. Croaky, Fussy and drab, she’s as good as a frog’s grunt. Her Suga Ray snippet with DB Records may be close to Don Jazzy’s hit Dorobucci, but will it bring back Dbanj’s groove? Game on? 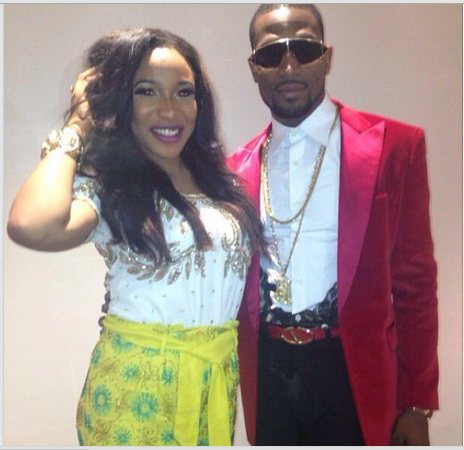 It may be difficult to comprehend D’banj’s sudden decision to sign Tonto, given the array of talents in the land. From the streets of Lagos to the creeks of Port Harcourt, talents abound. Granted, Tonto is not the first actress to make a mess of music, but never has anyone been this proudly woeful.If Genevieve was terrible, then Tonto is suffocating.

So what was D’banj thinking? Could it be that he aims to beat Don Jazzy to his boot and boast of a raving female act…say one in the class of Tiwa savage? Or as Tonto’s Suga Ray suggests, to provide a close substitute to Don Jazzy?

Seems D’banj has never been more confused. If anything, Good Music seems to have outdone him. D’banj is floating. Nowhere to be found. Can he say he’s better off his Mohits days? Where are the hits? The awards… he’s sure scooping all of them!

Could his mixed fortunes also have affected his ability to spot a true talent? Unlike the days past, D’banj has not struggled with anything but music. While he was instrumental in honing the sonorous Wande Coal, he seems to have lost his steam. Ditto his waning songs, popularity, acceptance and the signing of the croaky Tonto to his label.

Perhaps, Dbanj may have settled for the wide card of honing talents, turning scrap to diamond. After all, it took Don Jazzy to transform Dr Sid into an endearing singer today.

Is Tonto such a music talent? Really? Isn’t this a case of pushing one’s luck too far? But, wait a minute …can D’banj really turn a music frog in Tonto into a music diva?