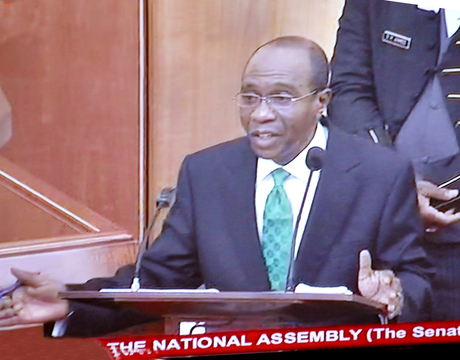 The new Central Bank of Nigeria (CBN) Governor, Mr. Godwin Emefiele, who assumed office on Tuesday, has been urged to make his obligation to the people of Nigeria and the government he is serving, his top priorities rather than self.

A faction of the Nigeria Governors Forum, led by Governor Jonah Jang of Plateau State, made the call in a statement issued by the faction’s administrator, Mr. Osaro Onaiwu, in Abuja on Wednesday.

The Jang-faction encouraged the new CBN governor to stay faithful to the roles and functions of his job, while also admonishing him to beware of those who may want to use their relationship with him for personal gain rather than for collective good.

The statement further stated that the NGF was looking forward to a cordial working relationship with Emefiele even as it expressed the governors’ hope that the new CBN Governor’s vision for the apex bank would be one that would encourage fiscal responsibility in both the public and private sectors and usher in an era that would enhance the growth of small and medium scale enterprise through policies that would encourage lending to this sector by commercial banks.

The parallel NGF also called on Nigerians and those in the relevant sectors in particular to support Emefiele in his new role with a view to ensuring monetary stability for the common good.