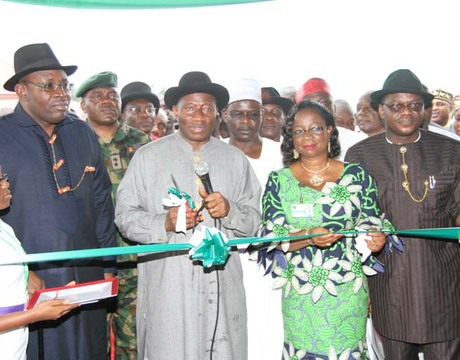 President Goodluck Jonathan said on Wednesday in Abuja that his administration was committed to speeding up infrastructural development through massive investment.

Jonathan said this while performing the ground breaking of works on the Outer Southern Expressway (OSEX), a project involving the rehabilitation and expansion of the Expressway Phase I of the Federal Capital Territory (FCT), Abuja.

The President, who was represented by Vice-President Namadi Sambo, said the Federal Government would continue to “bring smiles on the faces of Nigerians” through projects that would launch the nation to greater heights.

“It is worthy of note to state that our concerted efforts are yielding positive results and the whole world is paying attention to us.

“One of the cardinal objectives of this administration in line with our Transformation Agenda, is to spiritedly pursue the provision of infrastructures across the country and in the Federal Capital Territory.

“As you might all be aware, works on the Lagos-Ibadan Express Road, Benin-Ore, the North-East (Kano-Maiduguri road), the East-West road and the Second Niger Bridge and the Oweto Bridge have all brought smiles on the faces of Nigerians from across these geopolitical zones.

“In our continuous drive for development, this administration is taking a step further by the rehabilitation and expansion of the present four-lane two-carriageway Outer Southern Expressway (OSEX) into 10 lanes.

“The scope of work also will run into 6.75km comprising four interchange structures”, he said.

According to him, government will not relent in its efforts at ensuring timely completion of the project.

The President said that the project, when completed, would further alleviate the hardship being experienced by FCT residents and other road users on a daily basis.

“It will also help to reduce pressure on other roads and save the productive time workers spend on the roads as they move about in the pursuit of their legitimate businesses”, he said.

Jonathan, who praised the FCT Administration for its efforts towards the realisation of the nation’s dream of a world class city, charged the contractors handling the project to deliver the job according to specification.

He said: “We are confident that you will operate in line with the global best standards and do hope you will justify the confidence we have reposed in you”.

In her remark, the Minister of State, FCT, Oloye Olajumoke Akinjide, noted that the rehabilitation of the existing Villa Roundabout to Ring Road 1 and its expansion from the current two-lane road to a ten-lane carriageway would cost nearly N40 billion.

She added that when completed, the road, built in the 1980s, would have eight bridges, four pedestrian bridges as well as other necessary infrastructure, including telecommunication ducts and street lighting.

According to the minister, the project, which has a completion period of 36 months, will meet globally-recognised standards.

Messages of goodwill were delivered by the Minister of Works, Mr Mike Onolememen and the Deputy Chairman of the House of Representatives Committee on FCT, Mr Rapheal Igbokwe.

Others, who spoke were members of the House of Representatives, representing FCT, Mr. Zephaniah Bitrus Jisalo, Hon. Isa Ega Dobi, and the Chairman, FCT Council of Chiefs, Alhaji Adamu Baba.

Baba, who is the Ona of Abaji, called for the expansion of the Nyanya-Keffi Road.

The News Agency of Nigeria (NAN) reports that the Outer Southern Expressway is one of the main regional roads provided in the Abuja Master Plan.

The expressway, which stretches over 65km from Villa roundabout through Kuje, terminates at Road A2 in Gwagwalada. (NAN)