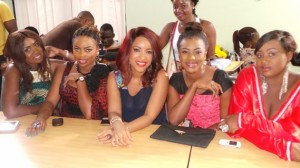 Very hot, sexy and curvy Ghanaian actress — Joselyn Dumas is all smiles as she has been added to the cast of the Lekki Wives series, season 2.

Dumas’ character, Aisha is a pimp whose husband is a drug baron and a rapist.

Dumas joins Kiki Omeili, Katherine Obiang, Adaora Ukoh, Chinonso Young and Keira Hewatch, all of whom were part of the series’ first season.

Produced by Blessing Effiom Egbe, the series details the lives of these women and their quest to satisfy their materialistic desires.

Enjoy the cast below: –