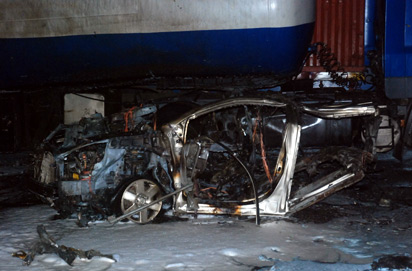 The Director, Lagos State Fire Service, Rasaq Fadipe, has said last night’s twin explosions at the entrance to the Folawiyo tank farm and the other inside the facility located on Creek road, Apapa, was a gas explosion and not a suicide bombing as claimed by some eyewitnesses.

The explosion, which affected four buildings including two banks, reportedly occurred at about 8:30p.m. Eyewitnesses said a suicide bomber rammed his explosives-laden car into a petrol tanker, which resulted in the explosion.

But Mr. Fadipe, who debunked the eyewitness accounts, said: “Suicide bomber? That is not the information I have. We were told of a fire outbreak caused by the explosion of a gas cylinder in an energy company.

“I cannot give you exact details because my men could not get easy access to the place. But they are on ground and casualty details will be given when the threat is brought under control”.