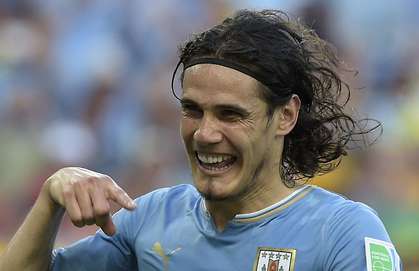 Louis van Gaal has told Manchester United that he is not keen on the addition of Edinson Cavani, opening the door for Real Madrid to sign him from PSG, reports Le 10 Sport.

The Uruguay striker is currently preparing to face England in the second World Cup group game but his future at Parc des Princes remains the hotter topic on the back pages.

Despite only signing from Napoli last summer, Cavani has struggled to adapt to life at PSG and has had to sacrifice his favoured central position in the team in order to accommodate Zlatan Ibrahimovic.

Cavani has lamented the fact that he has been forced to play out on the left wing for most of his debut season in Ligue 1 and is reportedly ready to quit if given the opportunity.

It seemed as if Manchester United would give him that opportunity after reports suggested that Old Trafford officials had launched a British transfer record of £56 million.

However, it seems new manager Van Gaal has notified Manchester United that he is not keen to sign Cavani and is happy to stick with Robin van Persie, Danny Welbeck and Javier Hernandez as his forward options.

Before Van Gaal was confirmed as manager, Cavani was thought to be favoured by Ed Woodward and remained a top priority as Manchester United
searched for a marquee signing. Now the Dutchman has given Real Madrid a clear run in their fresh efforts to sign Cavani.

It seemed that Real Madrid were going to be chasing Cavani’s Uruguay teammate Luis Suarez, but Florentino Perez is starting to rethink his options as
Financial Fair Play starts to clamp down on spending.

Suarez would cost Real Madrid in excess of £70 million while Cavani is rumoured to be available for £56 million.

Cavani’s representatives reportedly notified Real Madrid that he would be interested in a move at the end of the French football season and Bernabeu
officials responded positively. Real Madrid are willing to exchange Alvaro Morata with PSG in order to get a cheaper deal, but, for now, an agreement lies some way in the distance.{GMS}