Home National News Odd News Man Gouged Out Own Eyes Because He was afraid He Would Die...
Facebook
Twitter
WhatsApp 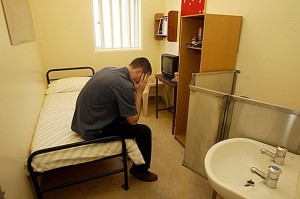 Eyes sparkling in delight and hands together in prayer, Sean Lynch grins into the camera, a boy full of promise with an exciting life ahead of him.

Today he sits in darkness in a psychiatric unit, his eyes gouged out, wrists and throat slashed and his genitals mutilated.

But the 23-year-old Derry man was not a victim of a horrific attack.

He subjected himself to the horrendous injuries while on remand in Maghaberry Jail and yesterday Sean spoke for the first time about his actions, describing them as a desperate cry for help.

He said: “I needed help and no one would help me. I had to do the eyes because they wouldn’t listen to me. I had no choice because I was afraid to die in that jail.”

Speaking from his Waterside home in Derry, Sean’s father Damien, 47, explained his middle child had always been at the peak of physical fitness but had struggled from childhood with mental health problems.

He said: “In the last eight months he was going downhill mentally, agitated and isolating himself from everyone.

“I was very worried about him but we hadn’t been able to get him any help because he wouldn’t tell the doctor what was wrong. It was a difficult situation but I thought surely in prison his assessment would mean he would get some care, some help.

“But I was wrong. He was thrown in a cell and basically allowed to try to kill himself.

“The night before he blinded himself he phoned me and the last thing he said was, ‘I’ll always remember your big blue eyes Daddy’.

“I was terrified he was going to kill himself and I called the prison and was told he’d be well looked after.

“But a few hours later he had gouged his eyes and was on an operating table with a surgeon trying to save his sight. Almost three hours later they admitted there was nothing more they could do.

“Now he’s sitting here bandaged and blind trying to make sense of what has happened to his life.

“I trusted the jail would look after him but his life is all but over. He has nothing left except a heartbroken family and we just don’t know what to do.

“I’ve spent the last week with Sean in hospital and I have tried to work out how our life could have crumbled like this in the space of four days.

“Today he told me that he had no choice but to take this drastic action because he needed help and no help came. He said he thought he as going to die in the jail and blinding himself was a last resort. My son slashed his throat and his wrists with a plastic knife on Monday, June 2. He was patched up and sent back to his cell.

“His granda and I went to see him the following day and he was in an awful state. He had a black eye and was shivering really badly.

“He could barely walk and just shuffled towards us.

“His granda is 75 and he said that Sean reminded him of images from the Belsen concentration camp.

“He wasn’t fit to be in that visiting room. Everyone was staring at him and I just wanted to grab him and hold him tight but I wasn’t allowed.

“It was obvious to everyone in that visiting room that Sean was in a state and needed help, yet the staff just let him go back to his cell.

“And the following day, he took a piece of glass and mutilated his privates.

“Surely to God that is the ultimate cry for help from a man. To cut yourself open in such a violent way is horrendous. Sean needed to undergo a two-and-a-half hour operation at the Royal Victoria Hospital to have his privates reconstructed.

“Again he should have been put on suicide watch, looked in on every few minutes and staff employed to ensure such a vulnerable prisoner was safe.

“I was assured he was in a cell for vulnerable prisoners and he was being watched. I was told there were cameras in the cells and if he tried to hurt himself he could be stopped

“But no, it didn’t happen like that and he wasn’t safe. Within 24 hours he had gouged out his eyeballs and squeezed them so hard that they burst.

“Now he is blind and there’s no chance of recovery. He will never see us again, he’ll never play football again, or play his X-Box again.

“He will never read a book or be able to watch a DVD. The chances of getting a job are remote with his physical
injuries never mind his mental health problems.

“Today he’s sitting in a secure unit in Gransha hospital. The guilt I feel about him is awful because I trusted those people in Maghaberry to look after him properly. After he was arrested the police doctor contacted me to say he was worried about his mental health.

“A nurse called me from Maghaberry Jail and said she and her team would take good care of him.

“His granda Liam, his mum Terry, his sister Kay and wee brother Gavin, we are all in a mess. I have cried, sobbed and I feel broken.

“It was the Prison Service cuts that led to Sean ending up in this situation. There were not enough staff to look after him. On the night he gouged his eyes out that there was one warder on the landing with 40 prisoners, and one of them was Sean.

“I hold the prison and the health trust and the justice minister responsible.

“Sean’s life is ruined and I’ll never work again because I will look after him. I’d die for Sean. Now I’m going to have to live for him because he can’t do it himself.”