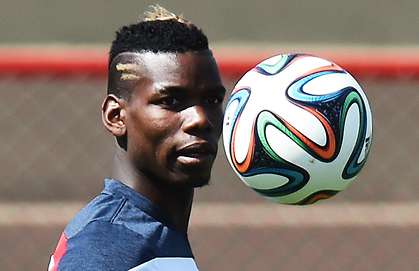 Manchester United or Arsenal could stop
Chelsea signing £60 million-rated Juventus star Paul Pogba this summer – if either of the Premier League clubs secure the signature of the France international’s club teammate Arturo Vidal.

The Express explain that Juve are reluctant to sell 21-year-old Pogba due to the strong interest in Vidal.

If the Chile international leaves the Serie A giants, the Blues’ hopes of signing the former Manchester United youngster this summer will be left in tatters.

Juventus boss Antonio Conte wants to keep both Vidal and Pogba in Turin ahead of the 2014/15 campaign, but that will be easier said than done. It seems, though, that Juventus are more willing to let 27-year-old Vidal leave the club over Pogba, who is widely regarded as the best young central midfielder on the planet.

Juventus are reportedly willing to sell Vidal if they receive an offer in the region of £44 million, which both Arsenal and Manchester United might be prepared to pay in order to significantly bolster their respective midfields.

Arsenal boss Arsene Wenger recently hailed the Chilean, telling reporters: “Vidal is one of the best midfielders in the world.

“He has everything. Incredible stamina, perfect timing. He’s a marathon athlete who plays football.” But Italian website Tuttosport claim Vidal, given the choice, would prefer a move to Manchester United.

The Red Devils are the team currently interesting the South American the most, but will United boss Louis van Gaal agree to splash out £44 million on another central midfielder after forking out £29 million for Ander Herrera?

As well as being prepared to pay Juventus a British record £60 million fee for Pogba, Chelsea are also willing to make the player one of the highest-paid
stars at Stamford Bridge. The Blues are offering the young Frenchman a significant pay rise, with a contract worth £180,000-a-week ready and waiting
to be signed.

Manchester United also want Pogba, who would be classed as a ‘home-grown’ player if he returned to the Premier League, but the midfielder might be
reluctant to go back to Old Trafford after failing to cement a first-team place during his first spell with the Premier League giants.{GMS}