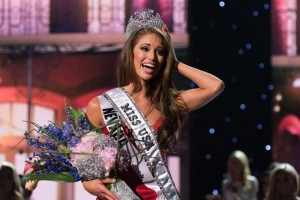 During an appearance on The Todd Show on 95.5 WPLJ in New York City, the newly-crowned Miss USA had some difficulty answering a question that hit a little close to home.

Nia Sanchez was participating in a quick quiz on the show when she was asked to name the capital of Nevada. Sanchez, who was named Miss Nevada before winning Miss USA, should theoretically have been able to come up with the answer, Carson City.

Unfortunately, she couldn’t do it and the host had to answer for her.

“Thank you I was going to say that! I was like, that one DJ host on MTV, back in the day, his name, that’s how I always remembered it,” Sanchez said. “Carson Daly, that guy!”

There have been rumblings that Sanchez faked her Nevada residency to compete in the Miss USA pageant.

“She met her requirements to compete. Nia is a great person and we know she’ll be a great title holder,” a representative for the Miss Universe Organization told E! News.