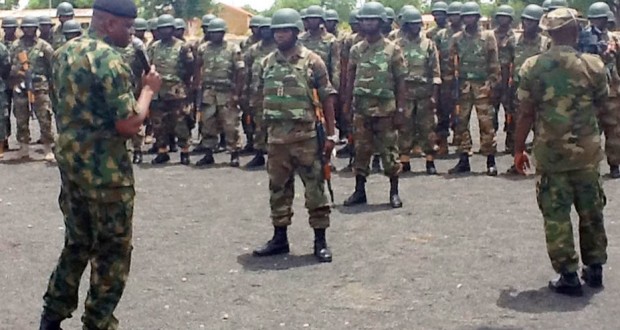 For their role in the alleged mutiny at the Maimalari Cantonment that serves as headquarters of the 7 Division, Nigerian Army, Maiduguri, Borno State on May 14 this year, 18 soldiers have been arrested, sources claimed.

The soldiers, who were arrested after a military board of inquiry set up by the Defence Headquarters in Abuja, which looked into the immediate cause of the alleged mutiny at the cantonment, are currently in detention.

They were arrested and disarmed after the investigation team found them culpable in the unfortunate incident and flown to Abuja.

Sources said the soldiers, who are still being interrogated, would soon appear before a General Court Martial in Abuja.

The suspects, it was learnt, would be charged with alleged mutiny, indiscipline, insubordi­nation, disobedience to standing orders among other offences, as stipulated in the Armed Forces Act.

Recall that angry soldiers on May 14, 2014, at­tempted to kill the former General Of­ficer Commanding (GOC) the division, Major-General Abubakar Mohammed, when they allegedly opened fire at him after sighting the lifeless bodies of 10 of their col­leagues, who were ambushed and killed by Boko Haram insurgents in one of the villages in the state.

The soldiers were said to have accused authorities of the division of possible sabotage in their operations.

The alleged mutiny led the military authorities to immediately redeploy the GOC and put a new commander in his place.