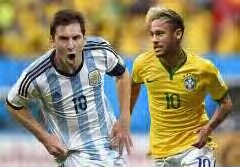 Brazil captain Thiago Silva says Neymar has what it takes to reach the level of his Barcelona team-mate Lionel Messi and claims the 22-year-old is “growing into a crescendo” at the World Cup.

Brazil face Chile in the last 16 at the Estadio Mineirao in Belo Horizonte on Saturday and the hosts’ hopes will once again rest on the shoulders of Neymar.

Like Messi, the former Santos forward has already netted four goals in the competition and Thiago Silva says the Brazilian is well on the way to matching the Argentina skipper.

“Technically, he has all the skills. Messi is one of the best of all, but I’m sure Neymar will get to that level.”

Asked the same question, Brazil boss Luiz Felipe Scolari agreed that Neymar is on the right track to be considered on a par with his Barcelona team-mate.

“Thiago just answered,” he said. “Messi is one of the biggest and the best, but Neymar is following in that direction.

“I will only give my opinion [on which player is better] in 10 to 15 years,” he revealed, but added: “Neymar doesn’t play to be the best, he plays for Brazil and stands by Brazil because he wants Brazil to be world champions.” (GOAL>