29-year-old Nigerian man, Mubarak Bala who declared he is now an atheist took to twitter to post series of messages of how his father who is a leader took him to a mental institution in Kano state against his will and had him sedated because he said he does not believe in God.

Mubarak Bala who goes by the Ex-muslim on twitter described all religions of the world are “like a real-life maze” said after being taken to the psychatric home, his phone was seized.

A Lagos based organisation, International Humanist and Ethical Union said he is been forcibly medicated by his Muslim relatives, despite being given a clean bill of health by a doctor and that they have asked a lawyer to take up his case.

The IHEU says that when Mr Bala told relatives he did not believe in God, they asked a doctor if he was mentally ill. Despite being told that he was not unwell, Mr Bala’s family then went to a second doctor, who declared that his atheism was a side-effect of suffering a personality change, the group says.

Mr Bala, a chemical engineering graduate however, says he got hold of a phone at the institution which he used to tweet about the incident, calling for help by organisations to set him free.

IHEU spokesman Bob Churchill said the group was concerned about his “deteriorating condition” and called for his “swift release”.

See some of his tweets below 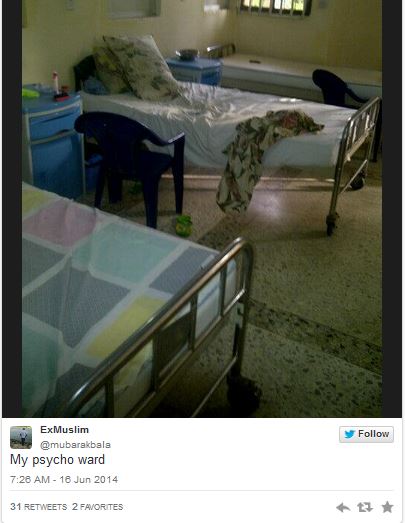