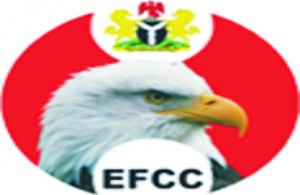 The Economic and Financial Crimes Commission (EFCC) yesterday said it is still probing the immediate past Minister of Aviation, Stella Oduah.

It also said only the Independent National Electoral Commission (INEC) has the powers to determine whether or not former Ekiti State Governor, Ayodele Fayose can contest this weekend’s governorship election.

EFCC’s Head of Media and Publicity, Mr. Wilson Uwujaren, spoke yesterday in Abuja at a press briefing to highlight the activities of the commission since March.

Uwujaren also responded to questions on high-profile cases the EFCC had been handling.

On the case involving Ms. Oduah over the purchase of two bulletproof cars allegedly for N255 million, Uwujaren said the commission was still conducting investigations.

He said: “I recall, during my last briefing, I craved your indulgence to be patient with the commission. At that time, she (Ms Oduah) had not even been invited to appear before the commission.

“Since our last meeting and now, I am also all of us know she was invited, she came and made statement to the commission. That investigation is also going on.

“On Oduah, I have said it here and I want to say it again that the matter is not closed. She has been invited and she has made a statement…” he stressed.

Asked if the EFCC would allow Fayose to contest the governorship election in Ekiti State as he is being prosecuted for fraud-related charges during his first stint as governor, the EFCC spokesman said only INEC could answer the question.

But he explained that a suspect or an accused is presumed innocent under the nation’s law until found guilty.

Uwujaren said: “I think the proper place to direct that question to is the INEC, which is the umpire over election. It is not the EFCC. Our job is not to preside over electoral matters.

“If the umpire believes that the electoral law allows such a person standing trial in court, even though he has not been convicted to stand for election, that is the job of the INEC; it is not for EFCC to decide.

“Fayose, for your information, is still standing trial on corruption charges before the Federal High Court. That case has been on since 2007. Based on Appeal Court’s decision, the matter was transferred to Ekiti State, where the crime was committed.

“And I recollect the last sitting of the court about two months ago. So, that matter is still fresh and he has not been cleared, the case is still in court.

“But by Nigerian Judicial tradition, we assume that he is innocent until proven guilty in court and we cannot at this moment convict him until the court decides”.

On alleged ongoing investigation of 14 serving governors, Uwujaren said: “I don’t know where you got the figure of 12 or 14 governors. I do not have any information on that. Once we have anything on any governor, we will pass the information to members of the public”.