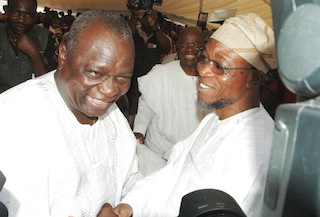 The Peoples Democratic Party, PDP, in Osun State has said that the attempt by the national leadership of the All Progressives Congress to woo former Governor Olagunsoye Oyinlola to their camp ahead of the August 9, 2014, governorship election in the state, cannot save the incumbent governor, Ogbeni Rauf Aregbesola, who is seeking a second term in office, from defeat.

State Chairman of the PDP, Alhaji Gani Olaoluwa, said this in a statement in Osogbo, the state capital on Monday.

Reacting to the visit of APC national leaders to the estranged national secretary of the PDP in his Okuku hometown on Sunday, Olaoluwa said that the loss of the APC in Ekiti State on Saturday had made the ruling party in Osun State to become jittery.

He said that the PDP’s victory in Ekiti State was a good omen, saying the party would sustain its winning streak in Osun State until it wins all the states in the South-West.

Olaoluwa said, “We understand the horrible situation the loss in Ekiti have put the APC; only that can explain the desperation in wooing Prince Oyinlola whose mandate they stole through the court.

“APC leaders must be jittery about the chances of the party ahead of August 9, 2014 and the 2015 elections. The truth is that their time is up in the South-West”.

But the spokesperson for the APC in Osun State, Mr. Kunle Oyatomi, said that Gov. Aregbesola will win reelection because he was popular among the grassroots people and he had performed excellently.

Oyatomi said, “The PDP is free now to say whatever it likes whether sensible or senseless. And coming from a politician like Olaoluwa, the PDP’s understanding of the rapport between Oyinlola and APC leaders wouldn’t have worth our bother but for the fact that Olaoluwa tried to link the issue with the forthcoming gubernatorial election of August 9”.