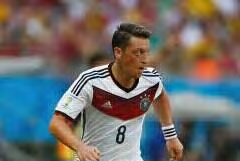 Mesut Ozil has praised the “genius” of Portugal’sCristiano Ronaldo, claiming that Germany showed their defensive ability by stopping him.

Die Nationalelf enjoyed a successful opening to their World Cup with Thomas Muller grabbing a hat-trick and Mats Hummels also scoring as they brushed aside Portugal 4-0.

However, despite Ronaldo enduring a frustrating start to the tournament in Brazil, Ozil insists that he remains an exceptional player and Germany should be given credit for containing him.

“Cristiano Ronaldo had given his all for Real Madrid,” the 25-year-old said in an interview with the Times of India.

“From my experiences in training sessions with him I know he is truly a genius. To be able to contain him the way we did was commendable for our defence.

“Germany have always played well in the World Cup. History proved that, since we were the first nation to play 100 matches at the World Cup.

“And it was the perfect start to the cup, beating Portugal 4-0. To be able to win against them with such a convincing margin proved we are ready. But there is a long way to go.

“We are confident and that reflected in our performance. We know we have trained hard, [and] we have tried to strengthen ourselves a little bit more because it’s a World Cup and we shall continue to do the same.”

Ozil, who has 17 goals in 57 caps, has come under scrutiny for some of his displays in Joachim Low’s side but was vociferous in his defence of his performances for the national side.

“That’s their view,” he said of his critics.

“What I know for certain is I have the confidence of our coach. So far, he’s been satisfied with me and that gives me immense pleasure, to be able to earn the faith of the coach.
“When the team starts so strongly, what can you ask from an individual? It was a team effort and we played our roles perfectly. We need to continue to do so in our remaining matches. But we have to be careful since it does not go that way in every match, especially in a World Cup.”