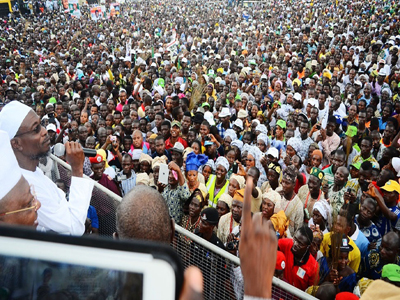 Governor Rauf Aregbesola of Osun State has stated his belief in the fact that leadership carries with it responsibility.

He made this known on Tuesday at St. John’s Primary School, Ikire, Isokan-Ayedaade-Irewole Federal Constituency, during his re-election campaign.

The governor told the people to expect more dividends of democracy than his first term if given their mandate to continue in office for another four years.

He listed projects executed by his administration in the constituency as the sinking of 88 boreholes; distribution of 2,299 Opon Imo (tablet of knowledge) to secondary schools; beatification of Asejire to Gbogan on the Ibadan-Ife expressway; building of five model schools; and construction of 60km roads, among others.

He said: “We believe power is responsibility, but the Peoples Democratic Party (PDP) believes that power has no responsibility. That is the difference between the two of us. Our party rules with the aim of running a government that is beneficial to the people. We have the people’s welfare at heart, but the PDP is selfish, greedy and avaricious. Therefore we do not resemble them. PDP was here for close to eight years; did it think ambulances were needed on our roads?”

The first civilian governor of Osun State, Senator Isiaka Adeleke, who recently defected from PDP to the ruling All Progressives Congress, APC, in the state, urged the people to re-elect Aregbesola so that he can “continue transforming” the state.

He said Aregbesola’s “excellent performance” in the last three-and-a-half years qualify him for another four years.

Adeleke, who was eyeing the PDP governorship ticket before it was won by Senator Iyiola Omisore, said Omisore lacked the capacity to lead the state because “he is bereft of ideas”.

He said: “I urge you to use your votes to bring back Aregbesola because he has worked tremendously for the state’s development. You should make sure we get 80 per cent of the votes. If we are able to do this, we will be killing an ant with a sledge hammer. Now that Omisore has made Adejare Bello his deputy, I will make sure he does not win his ward in Ede North”.

When the campaign berthed at the palace of the Akire of Ikire, Oba Olatunde Falabi, the monarch said the people do not need a soothsayer to tell them that the APC administration has brought huge development to the state.

He said: “We can see the development with our eyes. We can see the transformation of the state all around us. In fact, you have been doing the job as if your life depends on it. With this achievement, your second term is guaranteed”.

Many leaders in the constituency, including Hon. Ayo Omidiran, lauded the performance of the Aregbesola administration.

On the campaign train were the governor’s wife, Sherifat; his deputy, Mrs. Titi Laoye-Tomori; Secretary to the State Government Moshood Adeoti; the Chief of Staff to the Governor, Gboyega Oyetola; APC Interim Chairman Elder Adebiyi Adelowo and the Secretary, Prince Gboyega Famodun.