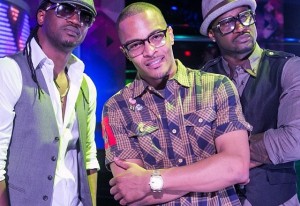 We have been talking about Wizkid and his recent exploits in the United States with various big shot rappers and entertainers in the States.

P-Square have even skipped all the other steps and went forward with shooting a video with an American superstar singer.

Nigerian pop duo P-Square have shot a music video with American rapper T.I. for a song on their forthcoming sixth studio album.

Their album is one of the most anticipated albums in recent times in Nigeria, it will be interesting to hear the direction they’ll be taking their body of work.

P-Square’s older brother and manager Jude Okoye was also present at the shoot.