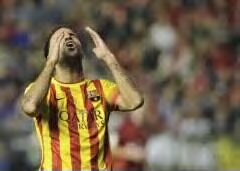 Gerard Pique has criticised Barcelona for the way they have treated team-mate Cesc Fabregas, insisting that the club don’t appreciate him as much as they should.

The midfielder has failed to cement himself as a key player in the first-team of the Catalan giants since he re-joined them from Arsenal back in 2011.

This summer, Fabregas has been linked to a move back to England, with Manchester City, the Premier League champions, already preparing a €37 million bid for the Spain international, while the Gunners are also interested.

Pique hopes his Spain team-mate will ignore the advances of his Premier League admirers and remain with Barca, but admits he feels the club have not shown Fabregas the respect he deserves.

“I really like Cesc and I know he is going through a tough time because the club don’t appreciate him as much as they should,” the defender said at a press conference.

“He is one of those players who would be first-choice at any other club in the world, the star of the team.

“Despite that, he is finding it harder at Barca. I don’t know what he is going to do; we haven’t spoken about that.

“I hope he stays, because if you look at his stats this season, he is our highest-scoring midfielder and the one with the most assists. Of course I want him to stay with us.”{GOAL}