Paris St. Germain have confirmed the signing of Chelsea defender David Luiz for an undisclosed fee.

The Brazilian defender has signed a five-year deal with the Ligue 1 champions and will join the side after the World Cup.

The deal reportedly costs PSG- despite having recently failed Uefa’s financial fair play (FFP) rules and hit with sanctions– the sum of £40m, a record fee for a defender.

“Right from the very first contact I had with Paris St-Germain, I was very happy,” Luis told the club’s official website.

“It’s a big club with a great history. It’s a new step in my life and I’m impatient to play for Paris and show what I can do.”

It had been imminent the 27-year-old was on his exit path from Stamford Bridge, after announcing his departure on Twitter and Facebook last month; thanking Chelsea fans and colleagues for their supports during his three-and-a-half-year stint with the Premier League club.

With three years left in the five-year deal he signed with Chelsea in 2012, he has now opted to try out the French League.

Meanwhile, Chelsea have already tabbed Barcelona midfielder Cesc Fabregas and are close to completing a deal for Atletico’s Diego Costa.

He will link up with his ‘Selecao’ team-mates, such as Thaigo Silva in the French capital. 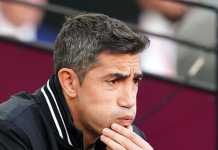