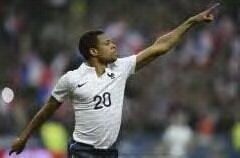 Tottenham are ready to pay the £9 million buy-out clause to sign Loic Remy from QPR but the striker is holding out for the possibility of a move to Arsenal after the World Cup.

Spurs want to sign Remy to strengthen the attacking options for new manager Mauricio Pochettino and extensive talks have taken place over a deal to bring the 27-year-old to White Hart Lane.

Tottenham are long-term admirers of Remy and are confident of signing him on a four-year contract after the World Cup in Brazil, where he is part of the 23-man France squad.

They tried a number of times to sign Remy under Harry Redknapp and the versatile forward is highly-rated by scout Ian Broomfield, who returned to Spurs earlier this year from QPR.

Remy wants to play for a club in the Champions League next season but has been impressed by Tottenham’s ambition and considers the north Londoners a leading Premier League club.

But while he is open to a move to Tottenham, Remy would prefer to wait to establish the extent of the interest from their neighbours, Arsenal.

The Gunners have previously linked with Remy and the former Marseille man was pictured watching their final home game of the season against West Brom in May.

Remy signed for QPR for £8m in 2013 and is almost certain to leave this summer following an impressive campaign on loan at Newcastle last term, where he scored 14 Premier League goals.{GOAL}