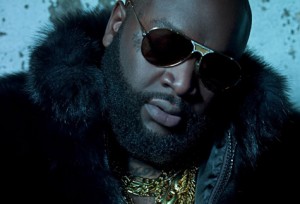 These American celebrities and their wahala sef, no matter how rich they are, they always seem to go off track.

According to TMZ, the Miami rapper was taken into custody on a misdemeanor possession of marijuana warrant following his performance at SuperJam 2014 at the Greensboro Coliseum.

“After he was done performing, we escorted him to the magistrate’s office,” said Greensboro police spokeswoman Susan Danielsen.

There had been a warrant out for Ross because he never showed up to court to deal with a marijuana arrest in Greensboro in 2013.

He has since been released from custody after posting $1,000 bond, and was scheduled to perform at the Staples Center in L.A. on Saturday night.

Just last week, Rozay made headlines after being denied entry to Hot 107.5′s Summer Jamz 17 in Detroit; however, he refuted reports that his no-show was due to an angry mob.