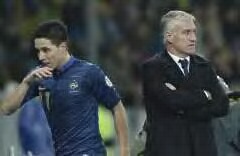 Former France striker Louis Saha believes Didier Deschamps has made the wrong decision in leaving Samir Nasri out of his World Cup squad.

The Manchester City midfielder was overlooked for the initial squad and was not handed a call-up even when Bayern Munich star Franck Ribery pulled out due to injury.

Deschamps made the controversial call due to fears over Nasri’s previous disciplinary issues with the national side at the 2010 World Cup – a decision Saha says is wrong.

“It’s difficult because he’s a great player, you should pick the best players in the team,” Saha said.

“Nasri proved over the years that sometimes he could be difficult to manage but it’s never been the case for Man City for some reason, he always behaves and always performs.

“Deschamps made a decision, and for me, it’s the wrong decision because Nasri could help France achieve things.”

Despite Ribery and Nasri’s absence in Brazil, Saha believes his nation should reach the quarter-finals at the very least, but admits winning the World Cup without a real leader in the side will be difficult.

If France fail to win, though, Saha says he wants hosts Brazil to clinch a record sixth title for the fans – although he admits Roy Hodgson’s young England team could make a real impact at the tournament.

“Definitely, they [England] have the quality to do that. It’s a tough group but it’s all about performing,” said the former Manchester United attacker.

“Now he [Hodgson] has brought a younger side with some very experienced players like [Frank] Lampard. Hopefully they can do the job.”

The 35-year-old has been astonished at his rise from the teenager he first met at Old Trafford into a two-time Ballon d’Or winner.

When asked about the Portugal international, Saha said: “I’m just a big fan.

“Cristiano proved it was always possible to improve and show there are no limits.

“He knew he wanted to be the best player and he knew that he had to work really hard but with all of his qualities he proved that he was right.

“Sometimes we have to not forget that it’s about the team, Real Madrid or Portugal. What he did in qualification is exactly what we expect from a good player.”

Portugal will face Germany in their Group G opener on June 16 – a side featuring veteran striker Miroslav Klose in their ranks.