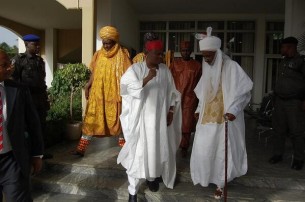 The All Progressives Congress, APC, has accused the Peoples Democratic Party, PDP, of instigating the violence that greeted the announcement of former Central Bank of Nigeria (CBN) Governor, Sanusi Lamido Sanusi, as new Emir of Kano, on Sunday, in an apparent attempt to destabilize the state. It therefore urged the Kano State Attorney-General to prosecute all PDP officials involved in this act of destabilization.

While the PDP has since denied that the statement emanated from Metuh himself, blaming one of his aides for issuing the unauthorized congratulatory message, APC wondered why a ruling party, which has access to Kano or any state government, would rush to the media to congratulate a contender who had not been selected, without even contacting the selecting authority to ensure the veracity of whatever news it may have heard.

“What is so urgent about congratulating the new Emir that could not have waited for a few hours for the appropriate authority to make an official announcement?” APC queried.

The party said when the announcement was eventually made and the contender, Sanusi Ado Bayero, the son of the late Emir of Kano, who had already been congratulated lost out, it is only natural that his supporters would feel shortchanged.

“It is therefore obvious that the PDP, through its National Publicity Secretary went out of their way to stoke the fire of violence in Kano.

“Since we live in a country which is being governed by the rule of law, the best option open to the Kano state government is for the State Attorney-General to immediately initiate criminal proceedings against PDP and its officials for incitement. Whatever explanations they have for their irresponsible and premeditated actions they should reserve for their defence in court”, APC said.